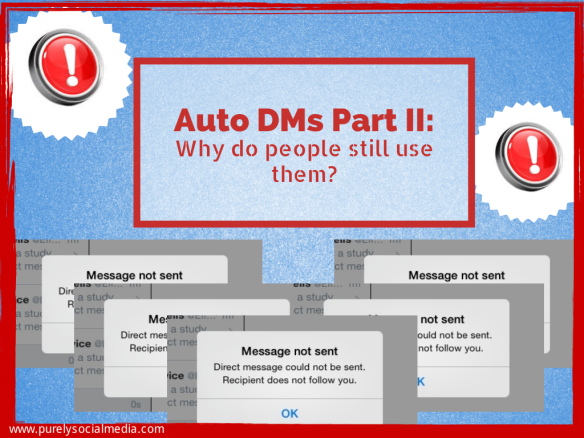 So we went on a mission, as promised in Part I, to find out the reasons behind why people still continue to use Auto DMs  and the findings were very interesting. Let’s put our science hat on and go over the details lab experiment style, well loosely lab experiment style.

Going into this experiment, our theory about Auto DMs was that Auto DMs were a waste of time. It didn’t make sense to us why people were using them given their current reputation for being spammy, annoying, or necessary. We’re human *shrug*and we realized that we may have been a little… ok a lot biased with our opinions about Auto DMs and not really considering the other side.

We hypothesized (with our science hat *wink*) that we must have been missing something and therefore, in order to remain a semi-neutral party, embarked on a mission to discover what it was that we just weren’t getting. Sometimes you need to play devil’s advocate with yourself to make sure that you’re not being myopic.

We responded to each of the 22+ Auto DMs we received last week along with some others we had never previously responded to with the same simple message:

We’re conducting a study on automatic direct messages and why people use them. Care to share your thoughts?

We obviously didn’t expect everyone to respond or for all of our messages to get through, but to be honest, we did end up having some great conversations with those who were able to respond.

Total messages unable to be sent: 17 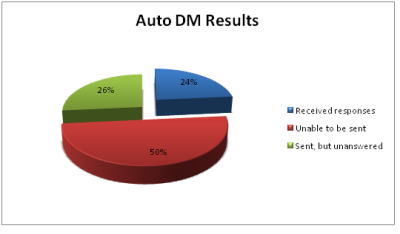 So basically, we were unable to respond to half of the people who sent us Auto DMs  because we they weren’t following us. If you consider this at a larger scale, think about half of the relationships you’re attempting to form being shot down. I suppose it’s worth the effort if the other half are being closed upon, but if you look at our results, we received less than 25% success in responses. 24% of the people we were reaching out to actually responded and the remaining 26% didn’t. This could mean a number of things ranging from lack of interest to people just not checking to see if anyone responded to their DMs.

If you’re trying to close a deal or generate a response with your Auto DM, the rate of people who are actually interested could be even smaller than that.

The 8 responses we did receive were very interesting. There were some people that had no clue that DMs were even going out from their account. How? We have no clue. Some people answered our initial question and were unresponsive when we probed more. Others admitted that it was just a trial run and they were no longer using it going forward, and there were some (very few) that were using  it proudly and claimed that it was working for them. From that pool here are a few of the best conversations we had so you can see the conversations for yourselves (we’re in blue): 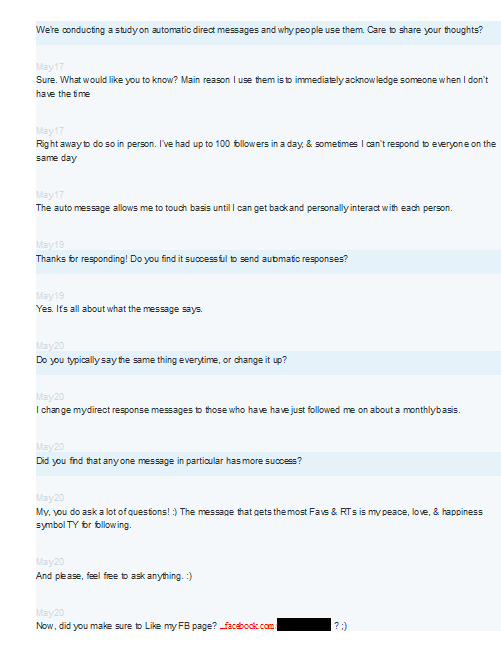 From these conversations we venture to say that Auto DMs are given a bad rap. They’re not entirely all as bad as they are thought to be, because it does provide an opportunity to connect with someone on a private personal level; however, given the bad rap we’re not sure that it’s worth the effort. Given that social media platforms are a public entity to interact with a vast amount of varying people from varying backgrounds, it only makes sense to keep in line with that and have public conversations that others can join in on. It gives an opportunity to meet new people. Direct messages seem to go against that.

However, if you are going to use Direct Messages as a form of marketing here something to think about. Instead of using automatic direct messages, type them by hand and be a little more personal, an instant response seems robotic. Nobody will fault you for not saying thank you for following immediately. It shows you’re human when you take a little more time to respond and make it worth it. The 8 people who responded to us were actual genuine people who cared about connecting with us, but unfortunately, there are several people who don’t even respond to their Auto DMs simply because on the preconceived notion that Auto DMs are crap. Our suggestion is to start off with an @reply to say thank you initially; from there you can move over to the direct messages to carry on the conversation.

That being said, we don’t have AS MUCH resentment towards Auto DMs as we previously did, but we probably still won’t ever use them. We will, however, at least make an effort to check them and continue with this experiment to see why people still use them and whether or not they are using them effectively.

As always, let us know your thoughts. If you have anything to add or any personal experience with Auto DMs, (positive or not) tell us about it in a tweet or email! We love chatting!