Are you a passive poster or an interactive user?

Automation is a wonderful tool when you’re a busy business owner who just wants to get a message out and have no time to sit, type, and post. You can post all around the clock without lifting a finger! And herein lies the problem.

Broadcasting is fine for television news, but has no place in social media. Automation is not the problem; it’s how people are using it that is.

You send an auto DM (direct message) out as soon as people follow you.

PROBLEM: Unless you change your settings, people whom you don’t follow cannot respond to your auto DM. This obviously makes it awkward when you ask a question in your auto DM and the other person wants to answer.  Also, it’s really unnecessary to do.

SOLUTION: It’s much simpler to thank them in a tweet, not to mention more polite.

You schedule your tweets via a third party site (Hootsuite, Buffer,…)  and never actually monitor your feed.

PROBLEM: You miss out on possible responses to your Tweets and appear disingenuous to followers when you don’t reply back at all or respond really late. Your tweet history is all about you. There’re no retweets that share the tweets of others, It’s just you broadcasting your thoughts and overselling yourself. Major turnoff!

SOLUTION: Pop in once in a while and retweet something that interests you. Your feed should be a nice mix of tweets from you, retweets of others, and responses from your engagement. (See “Distribution of Tweets” chart below) 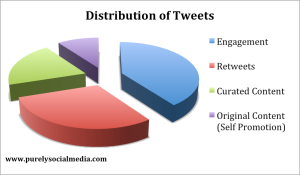 You schedule the same tweets repeatedly.

PROBLEM: Not only is it annoying to see the same tweet over and over again, but it makes you look like you don’t care. This has to be THE most obvious sign that you’ve automated your Twitter account and aren’t even checking it. Not to mention that if you’re doing this, you most probably aren’t engaging.

SOLUTION: Yea, yea, we get it. You’re busy! But it would behoove you to take some time to vary your tweets so that the same 4 aren’t in rotation. Take some time to do more research and find more articles in advance if you really MUST automate your tweets.

There’s a way to automate without it being so obvious. What way is that? Well, that we’re still crafting. We don’t automate our twitter =D, BUT we understand why people do. We’re going to do some more digging and dedicate a whole post about how to automate effectively, because we’ve seen plenty people who appear not to get any sleep at all because they’re tweeting all around the clock and still managing to be engaging. Don’t worry, we’ve got you covered!

Stay tuned. We’ve got plenty more for you.